What Happened In 2014: Kenley Jansen had a fascinating year. While he had excellent peripherals that led to a 1.91 FIP, 1.93 xFIP, and 1.64 SIERA, Jansen also had a .350 BABIP against. 2014 was the first year that checked in at over .300 in that category, and that led to him posting the second-worst ERA of his career at 2.76. As odd as those things are, it doesn’t even begin to tell his year’s story.

10 games into the season, Jansen had blown a save and taken a loss in back-to-back games and was sitting on a 4.76 ERA. People started to worry, but that was just the start of it, as he promptly blew a save against the rival Giants just three appearances later. By the 22nd game of the season, Jansen had been used 15 times, and it was worth asking if his struggles were because he was overused.

After Jansen’s struggles on the year continued with him giving up three runs and taking the loss against the Giants again in the middle of May, we had to put up a reminder that yes, Kenley was still getting screwed by luck pretty badly and was actually still awesome. Jansen seemed to get back on track for a while after that, but it was only temporary relief, as he imploded against the Padres and blew a save on June 20. At that point, patience for him didn’t exist anymore, analysts were looking for reasons why Kenley’s BABIP was still over .400, and fans KNEW they could never rely on him when it mattered ever again.

Jansen responded by allowing five runs the rest of the season, striking out 52 and walking eight in 35.2 innings of work. Jansen allowed more than one run just once more on the year, a blown save against the Nationals, which was one of only two blown saves or losses he took after June 20. His BABIP against during that stretch? .284, much more in line with his career norm. Huh, ain’t that something?

That Kenley righted the ship isn’t a surprise given his track record. Plus, we ARE talking about a guy that can throw a cutter 100 mph and that has developed his slider into a viable weapon. Also, when those cutters aren’t coming in at 100 mph, they’re coming in at 95 mph with this kind of movement:

So yeah. Maybe from now on have a bit more faith?

Besides, how can a guy who is the premier Clayton Kershaw imitator not be amazing, right?

Of course, Jansen’s season ended with a whimper, though it wasn’t any of his own doing. With a bullpen that stunk up the joint in just about every playoff game, Jansen totaled one inning pitched … because he’s the closer and closers only finish games or some genius logic like that.

As I said at the time, though, basically the only thing I was grateful for in terms of the 2014 bullpen meltdown is that it made Dodgers fans truly appreciate Jansen. Never before had so many people agreed with me that he needed to pitch in every situation he could, because who cares? He’s by far the best option for every scenario.

Unfortunately, well … Kenley, take it away: 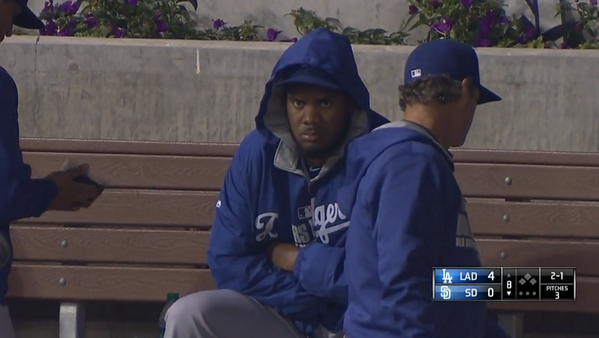 2015 Status: Kenley Jansen avoided arbitration by agreeing to a one-year, $7.425 million contract, and he has just one more year of team control after 2015, so the Dodgers will soon have to make a decision about whether to spend money on their closer. But that’ll come later down the road, and for now, there’s no reason not to expect another elite season from him in 2015.