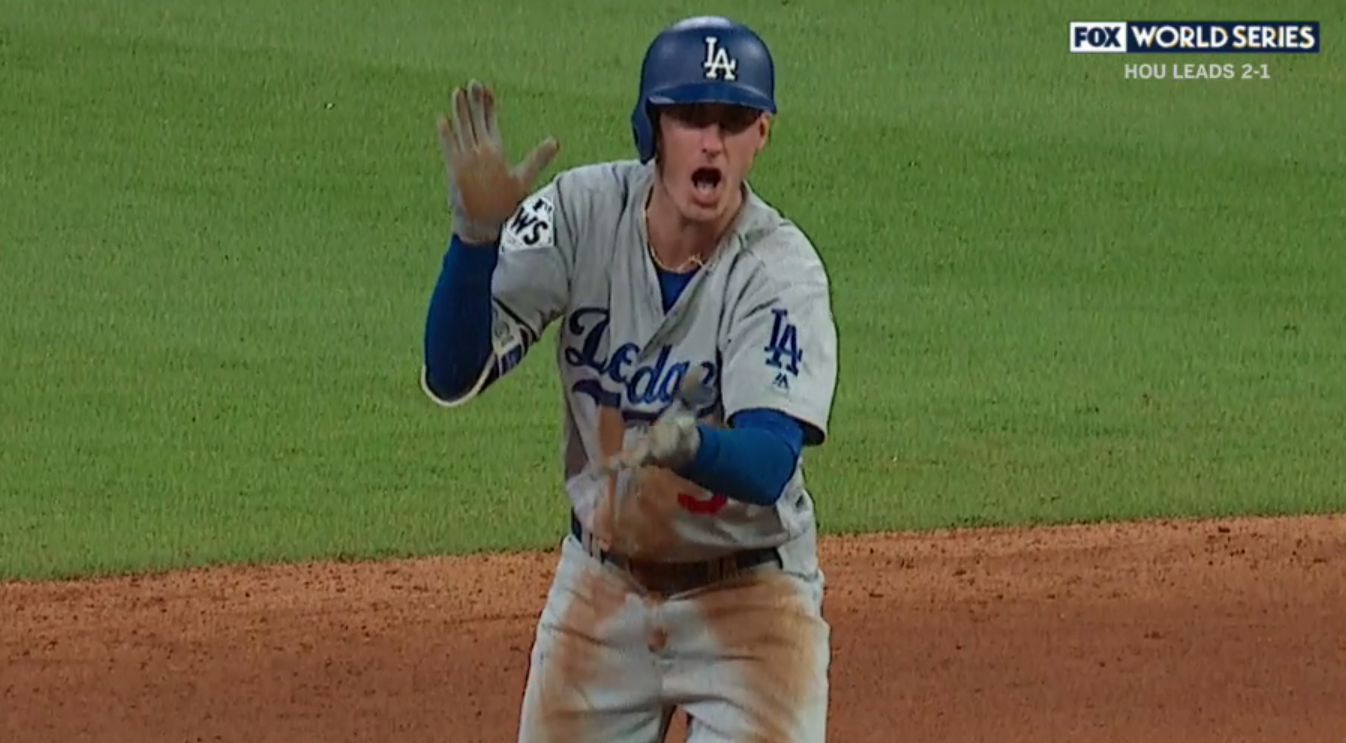 For the first time this postseason, the Dodgers faced something of a must-win game. Down 2-1 in the World Series to the Astros, getting Game 4 was absolutely essential to giving themselves a chance, because winning three in a row against an elite team like the Astros is always unlikely.

Well, after more of the same early in the game, the Dodgers came through when it mattered most. Alex Wood turned in a great start in the most important start of his career, and the offense exploded late behind Cody Bellinger and Joc Pederson, giving the Dodgers a 6-2 win in Game 4 and a 2-2 tie in the World Series.

From the jump things looked messy as hell for the Dodgers. Chris Taylor led things off with a single against opposing starter Charlie Morton, but Corey Seager struck out on three pitches, Justin Turner popped out to short, and CT3 got thrown out trying to take second when the first pitch to Bellinger was bounced. Just … so many uncharacteristic bad plays.

Morton then got 1-2-3 innings in the second, third, fourth, and fifth, just completely dominating the Dodgers lineup. The only noteworthy thing that happened during those frames occurred in the second, as Yasiel Puig was ruled out on a grounder when it clearly was fouled off his foot.

Not that it probably would’ve mattered a whole lot, but it’s just another way to show how nothing has gone right for the team since Game 1.

The sixth inning against Morton was a different story, however, as the bottom of the order continued to rally the Dodgers. Austin Barnes was hit by a pitch to start, Joc then lined out to left, and Enrique Hernandez singled to right-center to put runners at the corners with one out. However, the bats would squander yet another golden opportunity. CT3 proceeded to ground out to third on a change left up a bit, which got Barnes thrown out at the plate on the contact play since they obvious hoped to avoid a double play. Seager unfortunately didn’t do any better, lining out to left on the first pitch … a hanging curve. 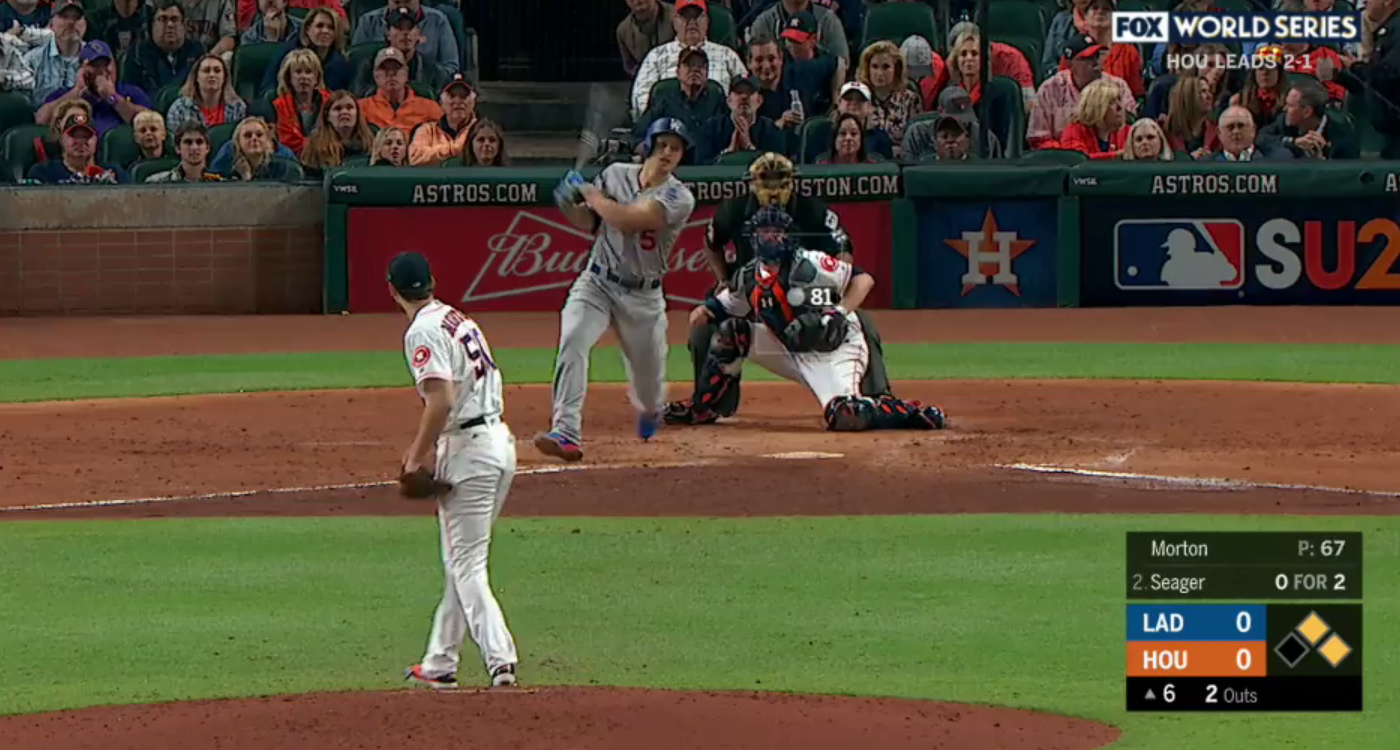 Meanwhile, on the other side of things, Wood stepped up for this team in a major way. Unlike the rest of the starters in the postseason to this point, the Dodgers not only needed him to be quality, but they also desperately needed innings from him.

Wood gave the Dodgers 5.2 quality innings over 84 pitches, striking out three and walking two, giving up just one hit. Wood actually took a no-hitter into his final batter, George Springer, who destroyed a 3-1 slider for the first run of the game.

While letting Wood face Springer was the easy decision because he allowed no hits, it was also one I disagreed with Dave Roberts on. It was Wood’s third time through the order, his pitch count wasn’t exactly low, and Springer absolutely destroys lefties. Roberts definitely thought about it, as he had Brandon Morrow ready to go, but decided to roll the dice on gut this time and lost. It’s why Rich Hill was taken out in the fourth in Game 2, and that was the right choice then, so he should’ve done it today as well. 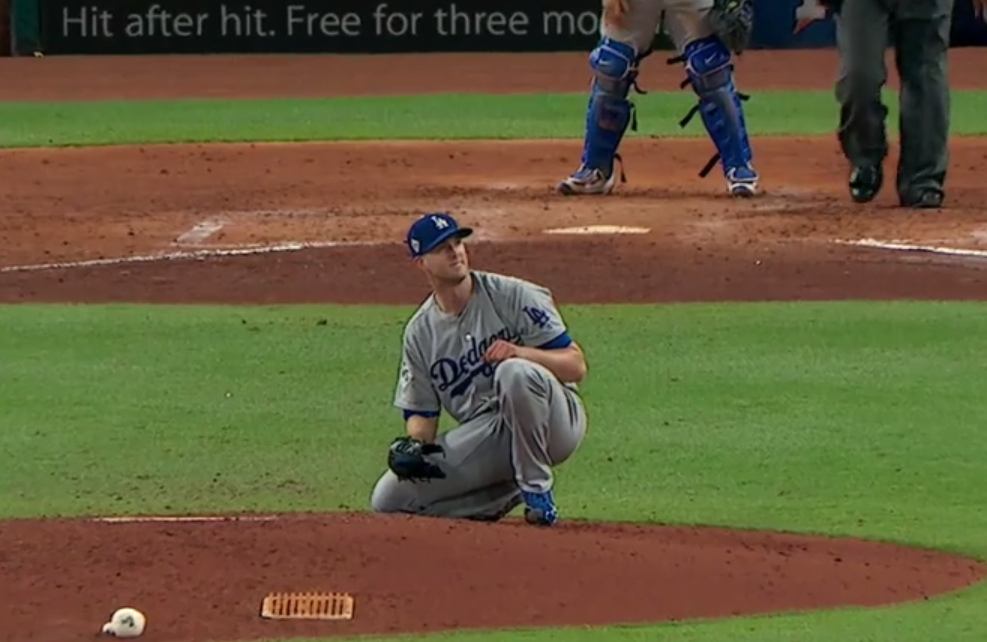 Thankfully, the Dodgers struck back immediately against Morton in the seventh, as Bellinger finally broke out of it with a one-out double to left. That knocked Morton out of the game, and with two down, Logan Forsythe capitalized on the Astros pen with a lined single to tie the game at one.

Meanwhile, Morrow was brought in to relieve Wood and face the heart of the Astros order. All he did was retire 2-3-4-5 in order to keep the score deadlocked at one. Perhaps more surprising was that Tony Watson was tasked with the eighth, and he did his job as well with a 1-2-3 frame of his own.

That provided the bats time to get after the Astros pen again, as after a 1-2-3 eighth, they exploded in the ninth. Corey started things by rolling a single through the shift, JT then drew a rare walk for the Dodgers this series, and Bellinger put the Dodgers ahead 2-1 with a double to center.

Still, the Dodgers needed insurance to avoid the Game 2 situation, and when Puig struck out it looked like a replay. However, after Forsythe was walked intentionally, Barnes hit a sac fly to right to give the Dodgers breathing room at 3-1.

Then Joc continued to step his game up in this World Series, hammering a fastball up in the zone over the wall in right for a three-run shot and a 6-1 lead.

Kenley Jansen then closed things out in the ninth, though he did allow a meaningless solo shot to make the final 6-2.

A big thanks to Astros fans for giving an ovation to Yuli Gurriel during his first plate appearance of the night, as he was clearly the victim of everything that happened and needs to be supported.

On a better note.

The Dodgers are now 9-3 in the playoffs and are deadlocked in the World Series, 2-2.

The two teams will do this again tomorrow in Game 5. Clayton Kershaw takes the mound against Dallas Keuchel, which should theoretically be an advantage for the Dodgers, but the Dodgers need to continue hitting to make it matter.