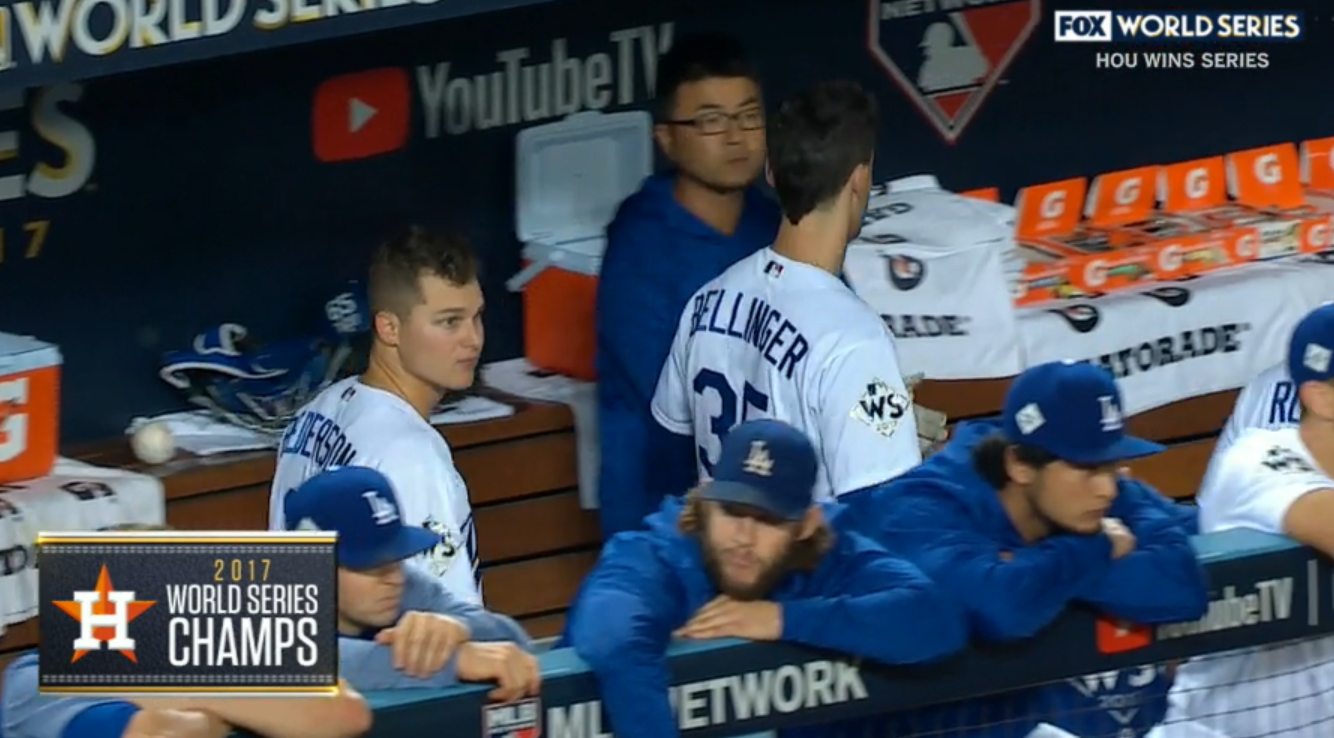 As seemingly preordained from the start, the 2017 World Series between the Dodgers and Astros came down to a decisive Game 7, which was truly the only proper way to end what will go down as among the all-time best. Both were 100-win teams during the regular season and both showed why in this series.

Unfortunately, the Dodgers got off to just an awful start in Game 7 and while they had chances to take advantage of the Astros pitching, they simply couldn’t get it done in a 5-1 loss.

Yu Darvish was looking for a revenge game after having one of the worst starts of his career in Game 3, allowing four runs on six hits and a walk, giving the Dodgers just 1.2 innings. Instead, he had an even worse outing, lasting just 1.2 innings again, but giving up five runs (four earned) on three hits and a walk.

Things started off about as poorly as possible for the Dodgers, with George Springer smacking a lead-off double. Then disaster struck as Alex Bregman chopped a weak grounder to first and Cody Bellinger ranged far to his right (probably should’ve been Logan Forsythe‘s ball) and unleashed an errant throw behind the covering Darvish and into the Astros dugout to score a run and put Bregman at second.

That would prove even most costly after Bregman would steal third and then score on a Jose Altuve ground out to first. Darvish would escape the inning without further complications, but the Astros had already jumped out to a 2-0 lead.

Well things got worse from there, as Brian McCann walked to start the second, then Marwin Gonzalez followed with a double to begin a rally. After getting Josh Reddick to ground out softly into the drawn-in infield, Lance McCullers rolled one slow enough past Darvish and to second that it scored a run despite being an out. Springer then followed with a knockout blow to Darvish, smashing a two-run homer to center to make it 5-0.

Brandon Morrow then entered and got his only out of the game, striking out Bregman to end the second.

Meanwhile, McCullers started for the Astros, and things started promising for the bats when Chris Taylor led off the game for the Dodgers with a double. Corey Seager didn’t do anything to help by following with a strikeout, but Justin Turner reached on a hit by pitch. Bellinger’s struggles unfortunately continued with a strikeout, but Yasiel Puig loaded the bases after he was hit by a pitch as well. That left things up to surprising postseason hero Joc Pederson, and while he hit the ball hard, it was sadly on the ground and right to Altuve to end the threat.

In the second, Forsythe started things positively again with a single. After an Austin Barnes ground out advanced Logan to second, pinch-hitter Enrique Hernandez was hit by a pitch to seemingly keep things rolling around with the top of the order due up. However, Taylor lined the first pitch he saw right at shortstop Carlos Correa for an easy double play to end the inning.

A Corey single and a JT hit by pitch meant another rally got going to start the third. Unfortunately, Bellinger struck out again on a barrage of curves, which was the only thing McCullers was left in to do as he was promptly relieved by Brad Peacock. Puig was the first batter Peacock faced, and he hit a fly ball to deep center, but it fell into Springer’s glove. Seager advanced to third, but it didn’t matter after Joc struck out to waste yet another chance.

The Dodgers went quietly in the fourth, but got something going again in the fifth. With one out, Seager drew a walk and JT singled to put two on and knock Peacock out of the game. Francisco Liriano was summoned to get Bellinger, and he managed to do exactly that by inducing a routine grounder that netted an out at second. Chris Devenski would then enter for the Astros and get Puig to hit a soft liner right to first, escaping serious trouble without allowing a run yet again.

Clayton Kershaw entered the game in relief in the third frame and immediately got a 1-2-3 inning. While he allowed an infield single and a wild pitch in the fourth, Kershaw got out of the trouble just fine. Thankfully the fifth resulted in an easy 1-2-3 inning as well because the sixth would be considerably harder.

Correa started that inning with a single, and a dribbler hit back to Kershaw by Yuli Gurriel advanced Correa to second despite being an out. McCann stuck with the trend, grounding out and moving Correa along to third. In a confusing move, if for no other reason than it turns their lineup over, Marwin was intentionally walked and then pinch-hitter Evan Gattis was also intentionally walked to load the bases. Kershaw thankfully got pinch-hitter Cameron Maybin to pop out and end the sixth without the game getting completely out of hand.

Kenley Jansen then followed Kershaw out of the pen, allowing a walk and a steal, but managing a scoreless seventh. He was followed by Alex Wood, who threw two perfect innings in the eighth and ninth to keep things at 5-1.

Charlie Morton entered in the sixth for the Astros, and the offense finally got on the board while also continuing to fail. Joc started things with a single and Forsythe walked to put two on with nobody out. Barnes followed by popping out, but pinch-hitter Andre Ethier rolled a grounder through the right side for a single to make it 5-1.

Next came the top of the order, so rally time, right? Wrong. CT3 proceeded to strikeout and Corey ended the life of one of his bats on a ground out to end the inning with minimal damage being done.

That was basically it. Morton settled down after that getting nine straight batters to end the Dodgers hopes, which at least was a kind way to do it, as opposed to how the offense had tortured us all game long.

And just like that, a team that could’ve gone down as the greatest in this storied franchise’s history is now a mere footnote to the first World Series title for the Astros.

This sucks on so many levels.