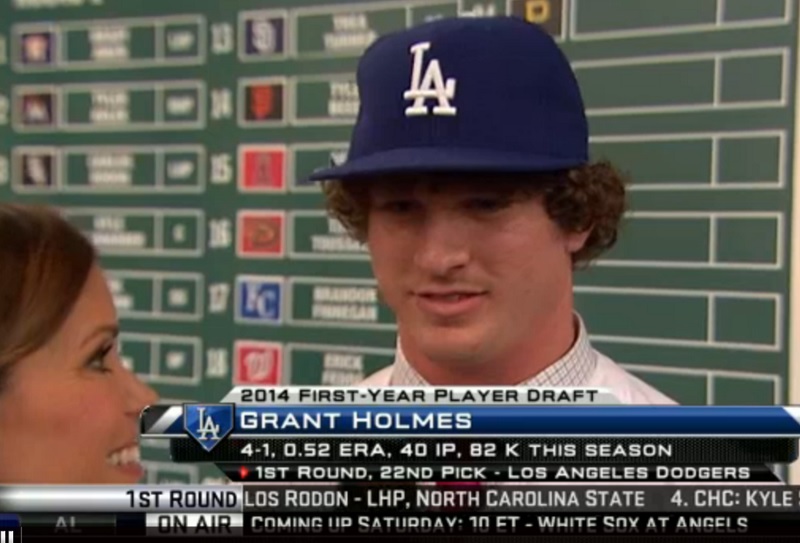 It was just a matter of time before it happened, but the Dodgers on Tuesday officially inked 2014 first-round draft pick Grant Holmes.

Jim Callis of MLB.com tweeted and said Holmes’ bonus is worth $2.5 million. At most, it’s a deal worth almost $519,500 more than the slot amount for the No. 22 pick. That amount would have made him the 14th or 15th pick, which was supposed to be his floor. Instead, he fell to the Dodgers at 22 and was paid as a Top 15 guy. Not a bad deal all around.

Holmes is already in Arizona after visiting Dodger Stadium last night. While there’s no official word, it’s pretty clear he’ll begin his professional career in the Arizona Rookie League. That’s exactly where the 18-year-old should be.

Here’s what I wrote about him when the Dodgers selected him 13 days ago.

“Holmes has a legitimate mid-90s fastball that touched 100 MPH in the past. It even hit the mid-90s late in outings and has plus-life. It definitely grades out as a plus-pitch down the road.

He has one of, if not the best, high school curveball in the draft. It’s a true hammer that sits in the low-80s. It can easily be mistaken for a slider. It’ll be a big swing-and-miss pitch for him going forward.

Holmes also has a changeup that has flashed average in the past. That will need to be refined for him to remain in the rotation, but the 18-year-old has plenty of time to work on that.

His delivery needs a little work, as he finishes a more upright than I’d like to see. But everything else really reminds me of a more athletic Chad Billingsley. He doesn’t have the bigger lower-half that Billingsley does, but he has a similar delivery and arsenal (stay away from the cutter!). Holmes is also in the mold of former Dodger first-rounders Chris Withrow, Ethan Martin and, to a (much) lesser extent, Lee.”

Up to this point, the Dodgers had saved $292,100 on their rounds 2-10 signings. With the reportedly Holmes signing for $2.5 million, they’re officially over budget — but they’re not in an trouble regarding next year’s draft.

As of this moment, the Dodgers are $176,484 under budget, if you factor in the 5 percent. That means they can sign Hunter Redman, or any guy drafted in rounds 11-40, with that much money over slot. So, Redman could conceivably sign for $330,984, but that would mean only $100,000 bonuses for the remaining unsigned draftees. But that won’t happen, as Redman won’t command that type of bonus.

Eleventh-rounder A.J. Vanegas might command a bonus worth more than $100,000, and the Dodgers have some high school guys they drafted who they could try to sign, so the more money they can save on Redman, the better.

It’s great to have Holmes officially in the fold. Some say he could move fast through the system (and he could), but I’m betting they take it a little slow with him. Starting in Arizona is a good first step, and I could see him skipping Ogden and going to Great Lakes, which wouldn’t be the worst move.

Dustin Nosler began writing about the Dodgers in July 2009 at his blog, Feelin' Kinda Blue. He co-hosted a weekly podcast with Jared Massey called Dugout Blues. He was a contributor/editor at The Hardball Times and True Blue LA. He graduated from California State University, Sacramento, with his bachelor’s degree in journalism and a minor in digital media. While at CSUS, he worked for the student-run newspaper The State Hornet for three years, culminating with a 1-year term as editor-in-chief. He resides in Stockton, Calif.
@DustinNosler
Previous Dodgers 4, Rockies 2: Hanley homers, as does his replacement
Next Another Day, Another Hanley Ramirez Injury Concern