Yasiel Puig is a candidate to win the National League’s MVP award. His chances have fallen lately, due to a recent slump and a recent hot streak (and, you know, narrative) by Giancarlo Stanton. Clayton Kershaw is in the mix, too. It’s too early to know who will win the award, but what we do know is that Puig is very, very good. Among LA Dodgers with at least 900 plate appearances, Puig is the third best hitter of all time, his 156 wRC+ nestled between Mike Piazza and Reggie Smith.

And yet, there’s some concern about Puig’s power. We get a lot of questions about it in the mailbag and on twitter. These questions are not without merit; Puig has only hit two home runs since May 28th, compared to the eleven he hit beforehand. Here’s a breakdown of Puig’s stats before and after an arbitrary endpoint which will seem slightly less arbitrary later in the post:

Before June 8th, Puig’s batting line was insane. His 188 wRC+ was close to the best in baseball. The batting line was boosted by a BABIP which he could not sustain, but it has been at a plausible level since. His strikeout rate has been steady and below league average, but his walk rate has dropped a bit. But, most notably, his ISO (SLG minus AVG, a measurement of power) has dropped from .256 before June 8th to .143 after. The power shortage is very real.

Of course, what we’re here to do is look for cause. To investigate further, let’s look into fly ball distance, a good proxy for power. Chad mentioned Puig’s fly ball distance in his last mailbag:

To further reassure you, realize that in 2013 his average fly-ball distance was 290 feet. This year? It’s 293 feet. Furthermore, there’s only been 13 homers, sure, but he has 32 doubles and nine triples, many of which have hit near the base of the wall or off the wall. And he’s also had a bunch of deep fly balls to the track in opposing stadiums that would’ve been out in Dodger Stadium. 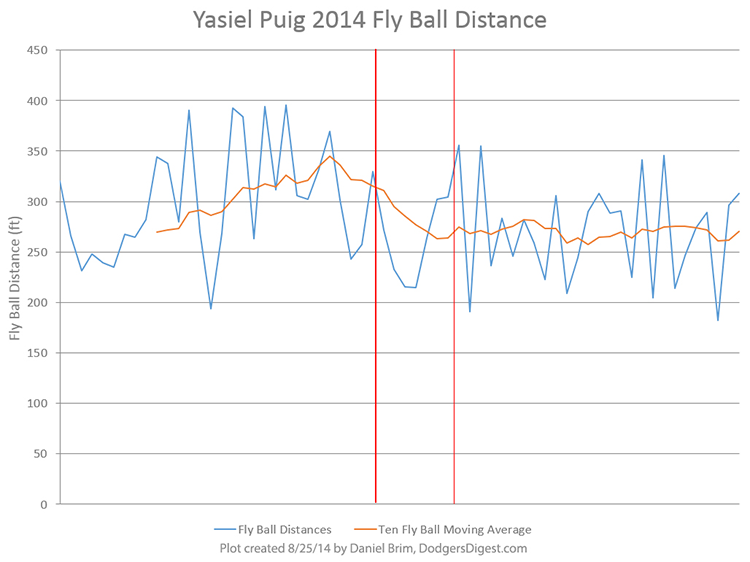 There’s a lot happening here, so let’s talk through it. The blue line is the distance of every individual fly ball Puig has hit this season. The data is a bit noisy, so I’ve added the orange line, which is the average of the ten previous fly balls at each data point. Following the orange line gives a good idea of the trends as the season has progressed. Puig’s fly ball distances started a bit low at 270 feet, climbed steadily over 300 feet (where it remained for over a month), and has fallen off to between 260 and 280 feet since. This backs up the same perception: Puig has been showing less power now than he was before.

There are also two vertical red lines on the plot. The first red line is June 7th, when Puig exited a game early due to a hip injury sustained on an awkward slide. Puig missed the game on June 8th (the date listed on the first table), but was back in the lineup on the 9th. The second red line is June 21st, when Puig left another game early, visibly limping on the same leg. This caused Mike to write a concerned article, which contained the following quote from Dylan Hernandez:

The right fielder said he has played with discomfort since June 7, when he made an awkward slide as he tried to break up a double play in Colorado. He said he receives treatment from the medical staff before each game.

So, that’s pretty scary. The drop in the orange line doesn’t match perfectly (started tapering off from the big peak at the end of May), but it’s close. It also has settled down to being pretty stable after the injury, too.

There are other potential causes of power drops, too. A look at plate discipline numbers might help:

Puig is swinging at a higher percentage of pitches than he was before the injury, on pitches both inside and outside of the strike zone. That explains the reduction in walk rate. Interestingly, although Puig is being more aggressive, he is still making contact at the same rate (which explains why his strikeout rate has not gone up at the same time).

Looking further into the data, Puig’s rate of contact inside the strike zone has decreased and his rate of contact outside the strike zone has increased, despite the completely steady overall contact rate. More contact on bad pitches would be a potential cause of Puig’s power loss, but out of zone pitches are a bigger chunk of his fly balls before the injury (30%) than after (23.5%). The higher amount of bad contact explains the lower BABIP, but the power question remains unsolved. A mechanical change could explain both the contact distribution changes and the reduction in fly ball distance, and could be caused by an injury, but I’m not really qualified to judge that. We’ll leave it for another day.

Even with the scary corresponding timing between the hip injury and the power loss, we should be cautious about assigning the injury as the only cause for Puig’s struggles. There’s the whole “correlation does not mean causation” thing, and as Chad noted in the excerpt above, Puig’s mean fly ball distance almost matches last season. A few of the longer hits have been classified as line drives, too. This could just be regression to the mean, using arbitrary endpoints to describe a story. In other words, it could be a coincidence. Puig hasn’t been visually impacted by his hip in some time.

Still, it’s hard to ignore how well the timing matches. I can’t say that he is still injured, but given the data above I can say that he could still be injured. Let’s just hope that if Puig’s hip is still bothering him, that it won’t get worse during the stretch run. If the injury caused a mechanical change which didn’t revert as Puig healed, hopefully the coaching staff can pick up on it. Puig’s cold streak of the past week or so won’t last forever (and, admittedly, does skew the post-injury data somewhat), and since the injury he still has a decent 119 wRC+. Still, it’s not the elite level of production which we have come to expect, and hopefully he’ll be closer to normal as the long season continues.

Daniel Brim grew up in the Los Angeles area but doesn't live there anymore. He still watches the Dodgers and writes about them sometimes.
@danielbrim
Previous The Dodgers Didn’t Claim Bartolo Colon
Next Dodgers @ D’Backs August 26, 2014: Two Games On, Two Days Off