The result of today’s game was meaningless, so we’ll get to how the Dodgers won 6-5 behind Scott Van Slyke‘s unlikely speed in a minute. However, the far more important part was the health of two Dodger starting infielders.

In the bottom of the first, Dee Gordon hit a ground ball. He grimaced, running gingerly to first base. After he was out, he was removed from the game and it was later reported that he was removed due to “right hip irritation.” Gordon suffered an injury to the same hip back in June, the same day as Yasiel Puig suffered a more publicized hip injury of his own. Gordon only missed one game before returning to action. Gordon is currently listed as day-to-day, so it’s a fairly safe assumption that he won’t play tomorrow. What a regular season for him.

Later in the game, in the fourth inning, Hanley Ramirez fouled a ball off of his kneecap. He collapsed to the ground, writhing in pain as the ball dribbled all the way out to the opposing shortstop. Here’s a still of the moment of impact: 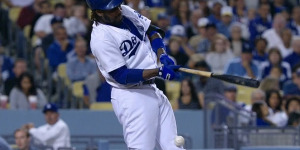 Ouch. After a visit from Stan Conte, Ramirez got up and stayed in the game, working a walk before being removed for pinch-runner Miguel Rojas. At the time, Don Mattingly was already removing non-injured regulars (Scott Van Slyke pinch ran for Adrian Gonzalez in the prior inning), so it’s premature to say how bad Hanely’s injury actually is based on his removal from the game. As with Gordon, it seems probable that he will get the final day of the season off in order to extend his rest before the NLDS.

So, onto today’s game. Dan Haren was okay, looking a tad more hitable than he has been in the recent past. He allowed two runs on six hits, including three doubles, in five innings of work. However, there were positives, too. Haren struck out four, but unlike his last start (which saw only 3 swinging strikes in 100 pitches), he was actually missing bats today. In Haren’s 78 pitches, he induced eight swinging strikes. The 10.2% swinging strike rate was his fifth best of the season. Generating swinging strikes has been an issue for Haren this year so today’s game was a welcome change in that regard. Sure, it’s the Rockies, but the Dodgers will take what they can get. This is what Haren had to say after the game:

Starter Dan Haren exited before reporters arrived in clubhouse, but he left a statement on his locker. Veteran move. pic.twitter.com/W5XzrruuDJ

The Dodger offense was active until most regulars were substituted out in the middle of the game (they made six defensive changes in the sixth inning alone). Adrian Gonzalez opened the scoring with a home run down the right field line in the first inning, breaking an 0-for-17 string. The Dodgers tacked on four more runs in the fifth inning, behind some shoddy catcher defense and doubles by Scott Van Slyke and Andre Ethier. Justin Turner had two hits and walked intentionally, because of course he did. Matt Kemp doubled and narrowly missed a second. After the sixth, the Isotopes (and Van Slyke) took over.

The low stakes made the eventual bullpen meltdown less annoying. The Dodgers once led this game 5-2, but by the ninth inning it was tied. Jamey Wright started the bleeding, allowing a run and three hits in an inning and a third. Scott Elbert, pitching for the second game in a row, combined with Brandon League to not allow any more runs in the seventh. Yimi Garcia allowed a home run to Michael McKenry in the eighth, then Paco Rodriguez allowed a home run to Ben Paulsen (a lefty, it should be noted) on his first pitch in the ninth.

As the game went to extra innings, Carlos Frias was impressive. He pitched three scoreless innings (against the same team which destroyed him two weeks ago), striking out five batters and walking one. Meanwhile, the DodgerTopes put together a string of 19 straight outs. Scott Van Slyke finally broke the string with a single in the 12th. After Tim Federowicz was hit by a Franklin Morales pitch, Van Slyke stole third base. Yes, really. It was his second stolen base of the game… yes, really. And he scored from second base on an infield single the night before.

The steal of third base set up runners on first and third with one out, and Miguel Rojas at the plate. While I was dreaming of a Miguel Rojas walkoff home run, Morales uncorked a wild pitch and Van Slyke scored the winning run, mercifully ending the marathon in a meaningless game. Which was only made possible because he stole third. Yes, really.

Tomorrow marks the final game of the regular season, which of course Juan Uribe will be managing. If it sounds like I am excited, I am. Zack Greinke will get the start for the Dodgers (on a pitch count, probably), and will face Christian Bergman at 1:10PM Pacific Time.